As originally published on ABS-CBN News by Armando "Butz" Bartolome 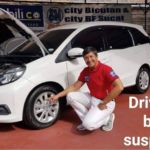 Bernard Libera is the fearless visionary behind the success of Automobilico.

Libera is a true car enthusiast who worked with Mitsubishi Motors dealership for 8 years before becoming an entrepreneur.

With a capital of just P28,000.00, Bernard started a carwash business. He then branched out into selling second hand cars.

It was a rough start since there was huge pressure on his part to try to raise more capital to acquire inventory and at the same time set upa decent car showroom.

The biggest hurdle was proving the company was worthy of trust, as the second hand car industry had a negative image.

Soon the pre-owned car business became main focus of Bernard, with the carwash business taking a back seat. His sales of pre-owned cars accelerated at an impressive speed, eventually pushing him to rent space in SM Bicutan. This eventually became the home and headquarters of Automobilico.

Buy your tickets now and get a chance to win 5 cars, 5 bikes, 100 laptops, 100 mobile phones and many other exciting prizes.  For more info:  visit https://www.myrideexpo.com

Automobili Co. the biggest car exchange business in the country supports the first international modified cars and bikes expo in Manila, Philippines – MY RIDE Expo Manila 2020. Get ready to experience the rush of being surrounded by the most hi-tech, unique, low-riders of the region for 3 days from 23rd to 25th of January 2020 happening on February 19-21, 2020. This expo will also host up to 50 modified cars and bikes competing for the top place in body and looks overseen by International judges and people’s votes. Daily live entertainment and raffles will take place and you stand a chance to win up to 5 cars, 5 bikes, 100 laptops, 100 mobile phones and many other exciting prizes brought to you by Pinnaclemena Events Corporation.